We continue to print our 1:4000 Star Trek ships. While the last article, Eras of the Federation, talked about what ships belonged in which era the Klingons are much less frequent in the changes to their fleet.

I started building the showcase of the Klingons with the B’rel class bird of prey.

Using ex astris scientia as a scale guide I took my high detailed bird of prey model and sliced it at 30mm, Added a peg to fit a star wars armada fighter stand and sent it to my printer. A side effect of printing it at this size us that a low detail model would probably look just as good. The ship shown here still needs to be cleaned up before priming. These take about 1 hour to print at decent settings so they are nit hard to use to flush out a task force. While the size isn’t exact it will look suitable for my tabletop. 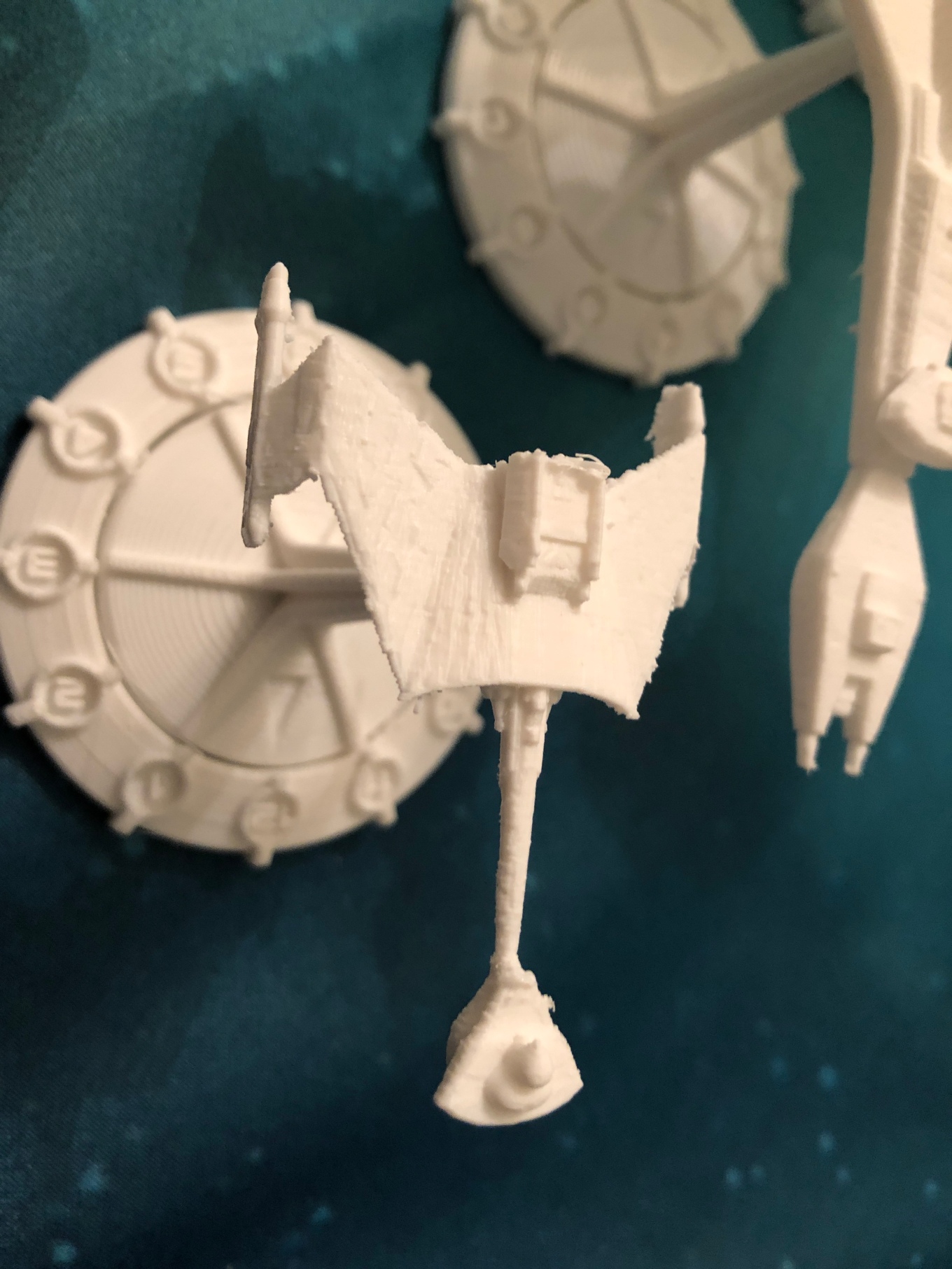 The K’tinga was next in developing the Klingon showcase and any good Klingon fleet.

The D7 was the Klingon main line battlecruiser for a very long time and the K’tinga refit to those ships even saw service in the Dominion War.

At 57mm it was stressful to remove the support material from the printed model because the neck is so thin. It printed well straight up though and the added keyhole slot for my stands fits well on it. The K’Tinga only takes about t hours to print on my printer. I will probably only print a few more of this model simply because of its succession in later times by the K’vort and Vor’cha.

The same birds of prey we saw in TNGs “The Defector” and later episodes seemed to be a scaled up bird of prey much larger than the B’rel. Thus my fleet has this model with its wings up representing the K’vort cruiser. The K’vort is a quicker print than my K’Tinga at only 3.5 hours per ship.

The Vor’Cha Attack Cruiser is the main line cruiser of any respectable fleet. At 481m or 120.25mm table scale it is represented on the table well. My printer seems to have issues printing the rear of the nacelles, which you can see on both the Vor’Cha and the Neg’Var. This ship takes about 8 hours to print, which in my mind is suitable for a ship if its size and importance to print.

I love this ship and have ever since I first saw it on screen. I remember getting the old playmates vorcha for Christmas the year my parents went ham, the also got my brothers the Enterprise D and the Romulan D’Deridex.

Every time one of these rolls off of my printer “shipyard” it brings me great pleasure and printing these will be super fun.

Last we come to the Neg’Var 170.5mm the largest ship in the Klingon fleet. This rolled off the printer shortly before this picture was taken after 21 hours of printing.

As a flagship only one or two ships will likely be printed but having it on the table should bring fear to any enemy that faces off against it.

Thanks for reading. Let me know your thoughts about this post or fielding Klingons.